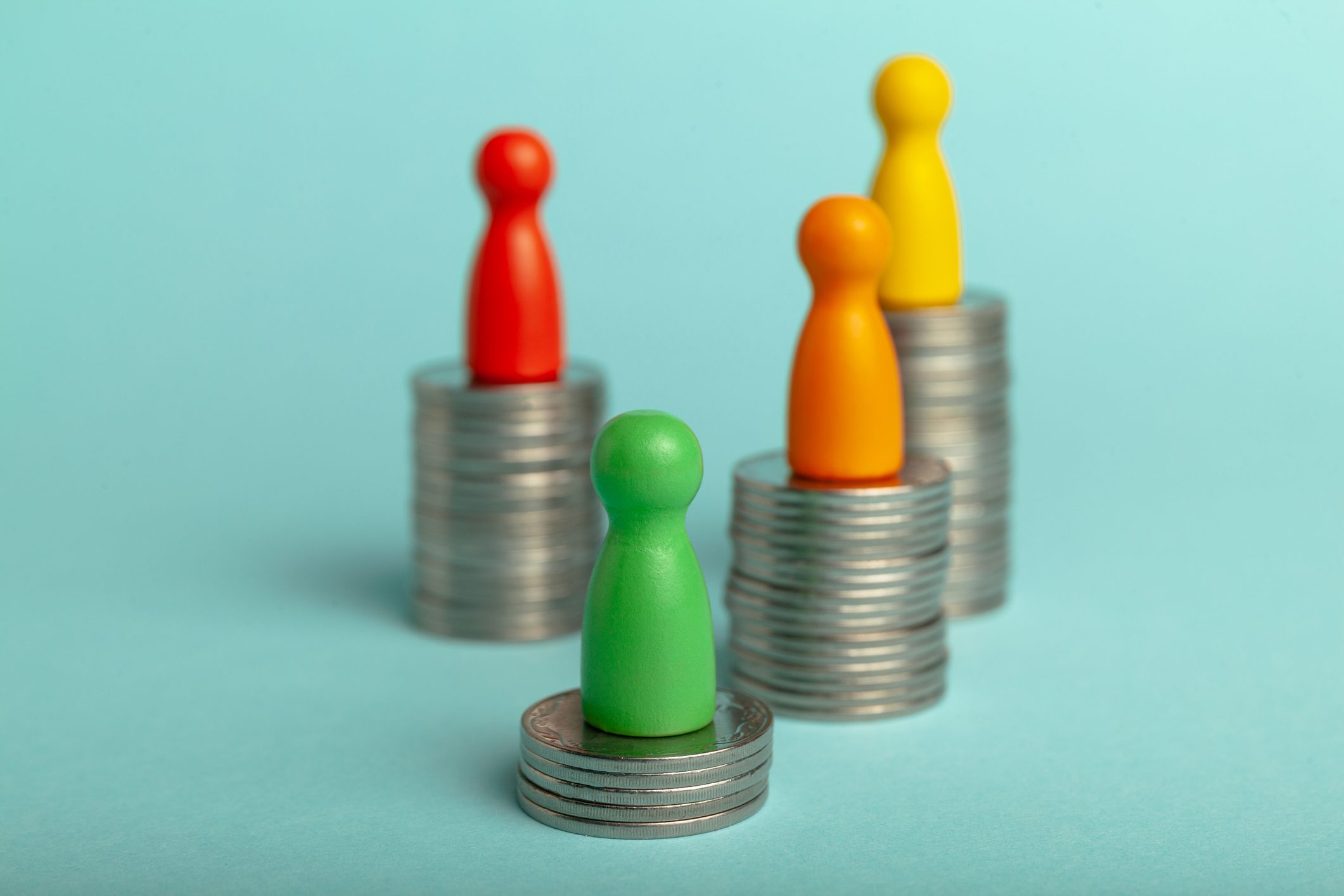 What Is Socioeconomic Class?

In the United States, your socioeconomic class, also known as your social class or socioeconomic status (SES), is determined by three factors, listed in descending order of perceived importance:

Keep in mind that different institutions may use different criteria to define socioeconomic status. The divisions listed below are generalizations of the socio-economic landscape of the United States today.

Generally speaking, the United States has three economic classes: lower, middle, and upper. However, we have chosen to isolate a fourth category, working-class, as distinct from the original three, due to its unpredictable nature in the U.S. economy.

Lower-class families lack enough income to meet their basic needs. The cost of living is prohibitively high without assistance, whether from family, friends, charitable organizations, or local or federal government.

The lower class includes people who are unemployed as well as underemployed. This means that they may have one or more jobs but do not make enough money to live on. Lower-class workers rarely make more than the federal minimum wage and may even make less due to other, less reliable sources of income, such as tips.

The lower class also includes individuals who cannot work due to age and/or disability. Children, in particular, make up a large percentage of the lower class. It’s estimated that nearly one-third of all people living in poverty are children.1

Keep in mind that the term “lower class” is not indicative of the dignity or worth of individuals experiencing economic hardship. Economic poverty is not correlated with moral poverty.

Working-class families walk the line between the lower and middle classes. They are employed, but their employment may not be secure. Large amounts of debt may put them in an economically precarious position.

Whether or not a working-class person is considered lower class or middle class depends largely on the perceived stability, safety, and skill of their labor. Many working-class individuals are “last hired, first fired,” making it difficult for them to afford middle-class luxuries.

A person with a dangerous job may qualify as middle class if their work is viewed as “skilled” or if their employment is protected by a union. But they may just as easily fall into the lower class if illness or injury forces them into medical bankruptcy. The unpredictable nature of working-class life is what separates it as a class of its own.

A generic income breakdown for a small family living in a mid-sized town in an average state would be:

The middle class is particularly difficult to quantify because much is based on perception, not reality. One study found that nearly 70% of Americans believe they’re middle class when the real number based on income is closer to 52%.2, 3 Debt, homeownership, assets, education, occupation, and lifestyle can all complicate what it means to be middle class.

Although income plays a role in the division of the upper class, much is based on perception and family status, as well as how the family’s wealth was attained. “New” money families earned their wealth in this generation or one generation past. No matter how wealthy they are, they may not be accepted by “old” money families.

“Old” money families earned their money in multiple prior generations and continue to protect and maximize their wealth largely through investments. Many upper-upper class individuals are unemployed because they can afford to live off of their family’s enormous generational wealth.

Both “new” money and “old” money upper-class individuals may not believe they are upper class because they compare their wealth to the ultra-wealthy class, characterized by at least $30 million in net worth.4 However, this does not mean wealthy families with less than $30 million are middle class. Generally speaking, families that make at least $250,000 are considered upper class, although that number may vary slightly based on location and the number of people in the household.

The type of job you have also factors into your SES. Occupational categories include:

The Psychology of Poverty

Early childhood poverty in particular appears to be more strongly linked to negative health outcomes than poverty experienced in late childhood or early adulthood. Studies have shown that poverty is most damaging when experienced during the first five years of a child’s life.6 Childhood poverty has tangible effects on brain development, resulting in delayed language acquisition, decreased memory skills, and impaired social-emotional development.

Studies have also shown that poverty affects memory and cognition in adults. The energy and effort expended on solving pressing financial problems in responsible ways can leave you with cognitive levels comparable to those you would have after losing an entire night of sleep.7 Additionally, people who are poor have higher levels of cortisol, the hormone associated with stress.8

Far from the myth that poor people are irresponsible or reckless with their finances, research suggests that poverty makes people better problem-solvers in certain circumstances. People who are poor must often make smart, resourceful decisions to solve their present problems effectively. However, they have fewer resources to handle any unintended long-term consequences of those imperfect decisions, unlike wealthier individuals.

The Psychology of Wealth

At a certain point, the psychological effects of wealth can be damaging. One study from Purdue University found that, while better economic security correlates with higher levels of happiness, the positive benefits of wealth plateau at a certain level ($95,000 a year for individuals).9 Another study from Arizona State University found that wealthy teenagers are at a higher risk for substance abuse, risky behaviors, and mood disorders than their lower- and middle-class peers.10

Being ultra-wealthy is linked to higher levels of personality traits known as the “Dark Triad”: psychopathy, narcissism, and Machiavellian (manipulative) behavior.11 These traits make them more likely to exploit others for personal gain, especially if it means climbing the socioeconomic ladder. Research has yet to determine if these personality traits arise due to wealth, or if wealth is more easily attained by those who already possess these personality traits.

According to the US Department of Veterans Affairs, about 60% of men and 50% of women will experience trauma at some point in their lives.12 For some, that trauma is poverty.

Because trauma depends on an individual’s perception and experience of the traumatic event, many different circumstances can “count” as trauma. Therapists often use the idea of big-T trauma and little-t trauma to help individuals understand how they may have been traumatized by seemingly “small” things.

Poverty may be a big-T trauma for some or a little-t trauma for others. Examples of big-T traumas that lead to or are exacerbated by poverty include:

Similarly, families who find themselves in poverty may also be dealing with one or more little-t traumas, such as:

Studies indicate that poverty may be considered a chronic traumatic experience.13 People struggling with poverty have been shown to have higher levels of posttraumatic stress disorder (PTSD) than the general population. However, these same economically disadvantaged groups are also less likely to have their PTSD diagnosed and treated.

Other societal and personal factors may contribute to a person’s traumatic experience of poverty, including:

Perhaps the worst part of experiencing poverty and mental illness as a child is that help is often difficult or nearly impossible to access. Children who act out in school because they are struggling with trauma are more often punished or criminalized than sent to a school counselor or therapist. Families may not know enough about mental health to seek treatment, or they may stigmatize the topic. Since children are financially dependent on their parents or guardians, they may not be able to seek mental health treatment, even if they desperately want it.

For families living in poverty, access to mental health care continues to be a struggle. Common barriers include:

Although you may face barriers, there are resources available to help you find affordable mental health care for you or your family. Many therapists offer online sessions for individuals who do not have access to reliable transportation. If you do not have insurance, some therapists may offer discounted rates to make your treatment more affordable.

Even more affordable mental health care may still feel out of reach. If you’re in crisis, free help is available now. Call or text one of the following helplines: